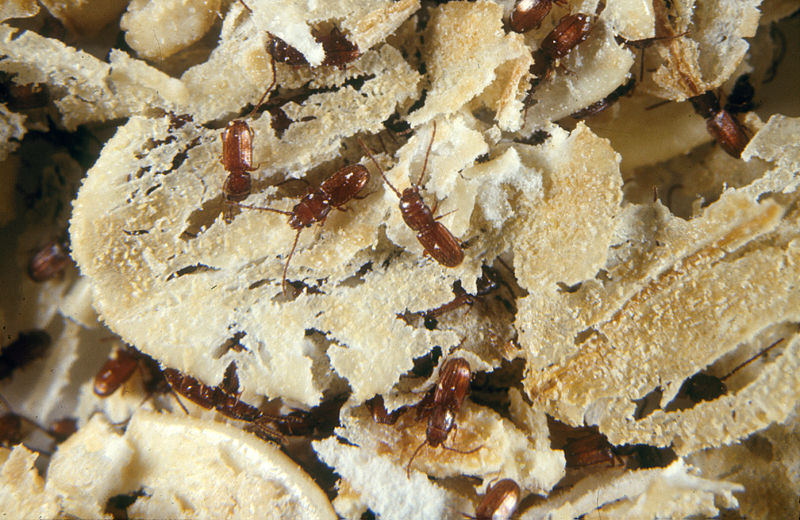 Several species of grain beetles cause problems in homes and businesses alike. The pantry pests attack stored grains, cereals, flour, spices, and other processed food products. Grain beetles are commonly encountered in a variety of manmade structures, such as grain elevators, warehouses, mills, home pantries, and railroad cars and cargo ships which transport food items. With their flattened bodies, most adult grain beetles can easily penetrate and hide in cracks and crevices. While the insects are not known to carry or pass any diseases to humans or pets, they make pantry products unfit for consumption. Grain beetle infestations can cause granaries, warehouses, mills, and even retail establishments to lose business and profits over time. Grain beetles feed on nearly any stored food product, particularly cereals, breakfast foods, flour, dried fruits and meats, pet foods, and many other items.

They are about 1/8"" in length and they have flattened body with very long antennae. Light red to dark reddish brown. Larva is yellowish or white, 0.5mm long growing to 4mm when mature Larvae, with characteristic tail and horns"

Adults are winged but rarely fly and can live for several months. Fast moving, seeking cover under grain or trash. There are several closely related Cryptolestes species with similar appearance. Feeds on cereals, dates, dried fruits and other commodities and is found mainly warehouses. Can survive winters only in heated structures The sight of adult grain beetles crawling on surfaces near stored products also indicates a possible infestation. Not known to carry or pass any diseases to humans or pets. Grain beetle infestations can cause granaries, warehouses, mills, and even retail establishments to lose business and profits over time. Infested food items should be thrown away.