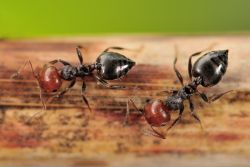 The acrobat ant is named, because of the way the worker ants carry their abdomens above the rest of the body as if they were performing a balancing act.

Acrobat ants are slightly longer than 1/8th inch. They vary in color from yellowish brown to dark brown, and the heart-shaped abdomen is usually darker than the rest of the body.

Each colony contains a single queen and thousands of workers. Despite the general lack of information regarding their specific reproductive practices, acrobat ant colonies are known to produce swarmers just like any other ant species. During the right weather conditions, the winged swarmers leave their nests to mate and look for appropriate places to begin new colonies.

Acrobat ants may nest both outdoors and indoors. Outdoor nests are most often in dead and decaying wood such as logs, stumps, dead trees limbs, firewood and hollow tree cavities. They may nest in damp soil beneath leaf litter or rocks. The small worker ants readily enter buildings through cracks around windows and doors and other openings. Trails of workers may be seen moving between the nest and a food source. Acrobat ants feed on a variety of foods, including other insects and sweets.